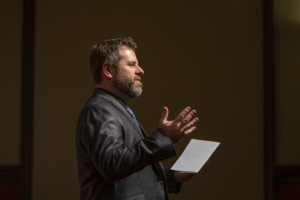 Keith D. Herris, a native of Canton, Ohio, is currently Chair of the Division of Music and Religion and Professor of Music at Bethel University in McKenzie, Tennessee. His teaching areas include various music theory courses, music appreciation, applied piano, piano pedagogy, and class piano.  Dr. Herris holds a Doctor of Musical Arts degree in Piano performance from Michigan State University where he studied with Artist-in-Residence Panayis Lyras.  He has also studied with well-known pedagogues Marvin Blickenstaff and Jane Magrath. He additionally holds a Master of Music degree in piano performance and pedagogy from the University of Oklahoma and a Bachelor of Arts degree in piano performance and pedagogy from Goshen College (IN).

Dr. Herris continues to be an active soloist, collaborative artist, and chamber musician. He has received first prize in numerous piano competitions throughout Indiana, Michigan, and Oklahoma, including the Chopin Youth (Collegiate) Piano Competition in South Bend, IN, Donna Turner Smith Memorial Competition at the University of Oklahoma, and the OMTA Graduate Piano Competition.  Additionally, he was runner up in the Oklahoma State MTNA Competition and named a finalist in the Kalamazoo Bach Festival and Kankakee Valley Symphony Orchestra Concerto Competition.  Dr. Herris has performed as soloist with the Bethel University Singers and Orchestra, three times with the Goshen College Orchestra, and was guest soloist with the Michigan State University Philharmonic Orchestra. He additionally collaborated with a colleague in a performance at Carnegie Hall’s Weill Hall. Dr. Herris has been the principle pianist for the Jackson Symphony Orchestra since 2014. He enjoys playing with the orchestra in several capacities, including: full orchestra performances, chamber concerts, and various outdoor events for vocal/instrumental ensembles.

As a Nationally Certified Teacher of Music (NCTM) through the Music Teacher National Association (MTNA), Dr. Herris remains active in MTNA, TMTA, and Martin Area MTA. It is through these associations that he has served as an adjudicator for auditions and competitions throughout west Tennessee as well as a presenter for local music teachers. Dr. Herris supports the local community as an active member of the McKenzie Rotary Club, a board member of the Dixie Carter Performing Arts Center, and serves as Music Director at the McKenzie First Cumberland Presbyterian Church. He also enjoys collaborating with his wife, Melissa, and has three lovely daughters.